Exposed concave cut-out to center back of desk for storing books, much like a sculptural effect of a Sol LeWitt or Donald Judd floating square cut-outs piece of art and we say art, because it is an art form to pull off stunning design, with function as the forefront to any furniture, as the body floating has an ethereal quality. As does the body of the desk prove, in floating the desk on a raised, recessed platform, as if inviting one to admire this stellar performance in design, such is Paul Frankl.

Either way it is a rarity to find such exquisite workmanship, design aesthetic, with the varying materials utilized in designing this piece de resistance.

After Frankl completed his architectural studies at the Berlin Polytechnic, he traveled, spending time in Berlin and Copenhagen before arriving in the United States in April 1914. He settled in New York City and brought with him an outsider’s fresh perspective and an enthusiasm for forging a uniquely American design aesthetic. Frankl began as an architect and later switched to designing and painting fine art and furniture. In the years between the two world wars he, more than any other designer, helped shape the distinctive look of American modernism. 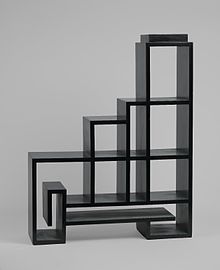 In the 1920s, he introduced his celebrated skyscraper style (before turning to metal furnishings in the 1930s). Frankl opened Frankl Galleries on 48th Street, calling his company Skyscraper Furniture, which became an epicenter of American modernism, including modern textiles and wallpapers imported from Europe.[1]

After he later relocated to Los Angeles and opened a gallery on Rodeo Drive in Beverly Hills, celebrities such as Fred Astaire, Cary Grant, Katharine Hepburn, Walter Huston and Alfred Hitchcock became clients.